Finding inspiration in Clark's motto to empower Cameroon through education 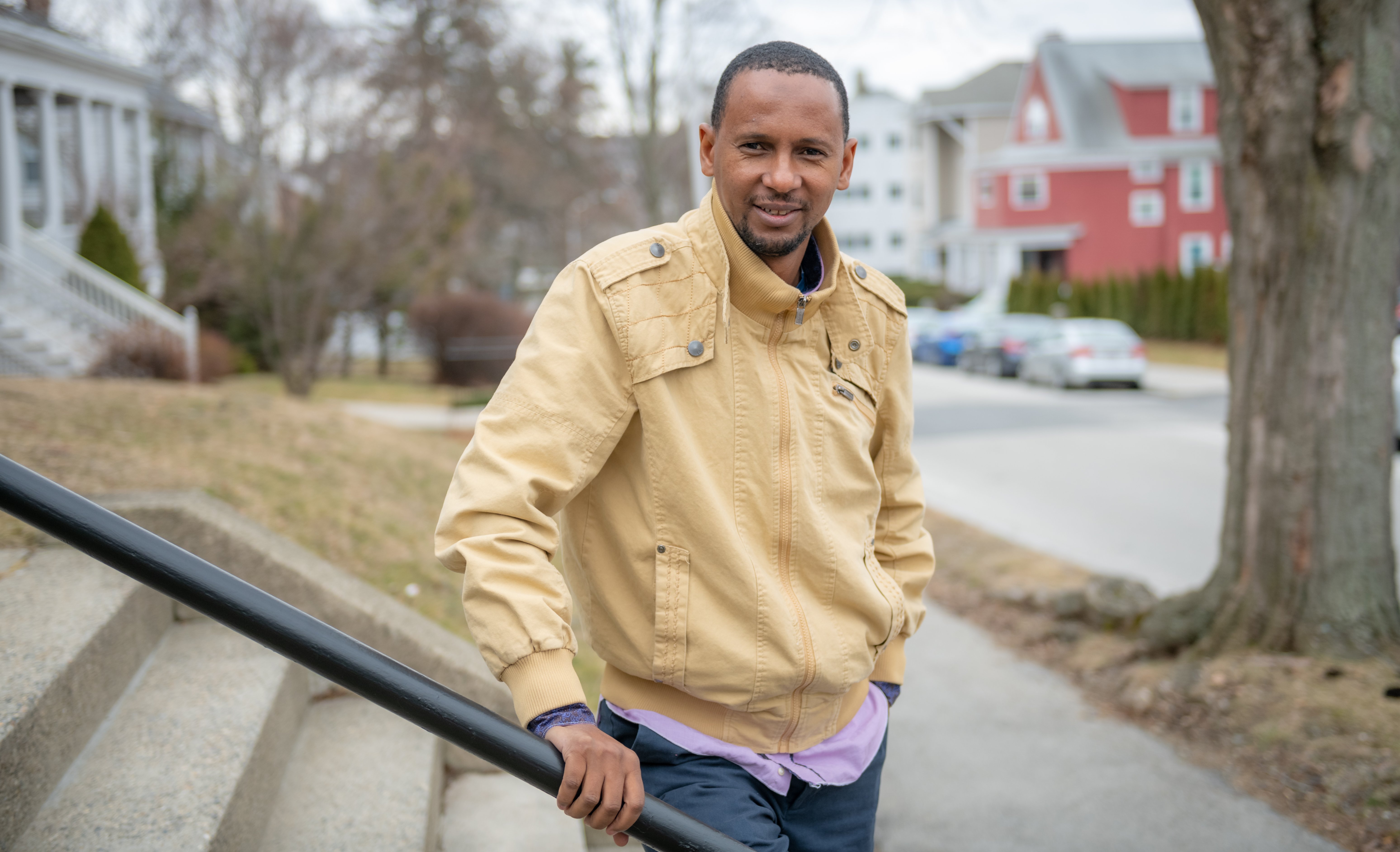 Buba Sulle Dicko always knew that he had something to say. “I felt like there was a message within me that people needed to listen to,” he says.

Dicko is now pursuing a Clark University master’s degree in international development to shape and spread the message that an education is essential to a better future.

He knows this firsthand. Growing up in Wum, a small cattle-grazing village in rural northwest Cameroon, Dicko wanted to have a voice in changing his community. After eight years of teaching and working in human rights activism, he sought opportunities to continue his education in the United States.

“I realized that I needed practical tools to create programs, measure changes, and respond to community needs,” he says.

Browsing the internet, he came across Clark’s website and was struck by the motto “Challenge Convention. Change Our World.”

“It resonated in a very special way for me, because from an early age I experienced what convention does to people,” he says. “The world will always change, whether we like it or not. But if we are not proponents of the change, the change might happen against us.”

Dicko saw the possibility of circumventing tradition and advocating for the kind of educational change that aligns with Clark’s call to action. “What you are always speaks more than what you say,” he asserts. “What you are is built on what you do on a daily basis.”

He was impressed by the way Clark’s International Development, Community, and Environment department deploys its expertise to make the world a better place. Dicko realized that a Clark graduate degree would empower him to more effectively address the challenges of his community through the use of research and data.

He admits that there are difficult moments. He’s had to leave his wife and children in Africa while he studies in the U.S., but Dicko is confident he made the right decision. “In the long run this will enable me to give my family a better life and also better serve my community and country,” he says.

Dicko began his career as a teacher who believed the best way to compel lasting change was through education. The government controls the education system, so Dicko asked that he be sent back to Wum to start a school.  “The government thought that having a community member as a teacher would help ensure that people would send their children to school, so in 2012 they sent me back to my village to teach.” he recalls.

He struggled against the villagers’ distrust of formal education. “My people thought the only way to protect their children and preserve their culture was to keep them from school,” he says. “I wanted to put a positive face on education.”

The tradition of early marriage also sealed off access to an education. Once young people married, they became part of the adult community and dropped out of school. Dicko found it difficult to speak out against this cultural cornerstone without antagonizing the community.

To combat the stigmas, Dicko included the community in school initiatives, like literacy programs, to convince adults of the benefits of education. He also used these opportunities to discuss issues facing the community.

Because of their isolation and a lack of awareness about human rights, the residents of Wum often fell victim to exploitation, arbitrary arrest, extortion, and land theft by land grabbers and human rights violators acting on the wrong side of the law. “People were being impoverished by the very system that was supposed to protect their interests,” Dicko says. He began bringing in lawyers to keep records of the “rights predators” victimizing his community.

“I needed to tell the truth, stand by the truth, and work for justice,” he says. In 2008, working with other activists, he created the Aku Cultural and Development Association (ACUDA) to educate his community about human rights. In 2013 he organized a workshop with lawyers, academics, legislators, and community leaders to provide Wum’s citizens with information and access to legal and government assistance. Government participation was critical to give the event legitimacy.

The workshop was successful, drawing more than 400 participants, many who told Dicko they’d never had such an enlightening and empowering experience. But there was also backlash from human rights predators who were bent on maintaining the status-quo of exploitation.

Dicko was arrested and prosecuted for “illegal fundraising.” International rights advocates came to his defense and appealed to Cameroon’s Prime Minister for his release. Ultimately, all charges were dropped, though it took him six months to clear his name.

Still, in the wake of the workshop, the number of human rights violations in the region dropped drastically. “The perpetrators became afraid because the people now had the knowledge and resources to help themselves,” Dicko says.

In the course of his career, Dicko also worked with former Peace Corps volunteers in Cameroon as a language and cross-cultural facilitator, and served as project coordinator for A2Empowerment, a nonprofit organization founded by Peace Corps volunteers that helps support girls’ education in Cameroon. His goal is to continue to work in the nonprofit sector to find funding for development activities for displaced populations.

Much of his motivation is personal: In 2019, his village of Upkwa in Wum was burnt down due to the ongoing civil war in Cameroon, and many of its citizens have moved away. Dicko is intent on reopening the school, but it will take time.

His Clark experience is already helping him build the foundation.

“Everyone at Clark, including professors, staff, and fellow students, are down to earth, listen, and have empathy,” he says. “I am more and more confident that the skills I am receiving from Clark will allow me to achieve my goals.”