Commencement 2019: 'What a journey it has been,' student speaker says

For Ayodele (Michael) Agboola, graduate school has been all about conquering fears.

From departing his hometown of Lagos, Nigeria to taking the stage as the graduate student commencement speaker in Worcester, Massachusetts, Michael pushed himself beyond his comfort zone every step of the way.

After careful deliberation, a committee of campus administrators chose Michael to give the student speech at Clark University's 115th Commencement ceremony. When Michael found out he was selected, he was thrilled. "I am so excited to have been given an established ground with a great audience to voice out my extreme appreciation for Clark University," he said.

Drawing on his personal experiences as an international student, Michael addressed his fellow graduates with compassion, gratitude, and optimism for the future that lies ahead.

When Michael flew to the United States to begin his graduate program at Clark University, it was the first time he'd ever left his home country. "I felt an overwhelming spectrum of emotions; fear being the most distinct of them,'" Michael shared in his stirring commencement address. "I wish I could take back those times I spent worrying about what lies ahead of me as an international student...Clark has made me feel very much at home."

It's a feeling that rings true for many international students. Although traveling far away from home is certainly scary, the university's focus on diversity and inclusion initiatives encourages students to feel comfortable quickly upon arrival to campus.

Upon his arrival, Michael immersed himself quickly and easily into campus life. He served as president of the Graduate Student Association and international student representative for the IDCE department during his time at Clark University.

According to Michael, the beauty of Clark University is that it taught him to embrace different cultures and ideas — he even learned conversational Chinese to foster communication with his classmates. 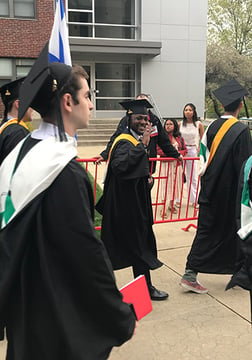 "Clark University has made me appreciate the power of diversity through my exposure to a myriad of cultures," Michael said. "This institution has given me and all other students an excellent experience exploring the culture and distinction of numerous nationalities even without leaving the confines of the university."

For Michael, who is shaping a career that is highly focused on developing international connections, the exposure to global integration is critical.

Michael's M.S. in Geographic Information Science for Development and Environment degree from Clark University is actually his second master's degree. He earned his master's in Remote Sensing and GIS before arriving to Clark. "I came into the program with a basic knowledge of GIS professional practice applied to a very narrow focus," he said. "I thought I knew so much in my field before I came to my graduate program, but I have been humbled and re-shaped by the practical-based curriculum that Clark University holds."

Michael experienced first-hand the benefits of learning from passionate and resourceful professors, who challenge students to grow their skill-sets and think critically. "Our teachers have been supportive both within and outside of the classroom; they have presented us with many opportunities for research and real-world application of learned concepts," he said. "Let it not surprise you all today that some of my colleagues had been offered jobs solely because of their engagement in class."

As the first in his family to receive a master's degree, Michael credits his success to the support of his mother.

"I could not have come this far without you my mother; Mrs. Caroline Agboola, you went through thick and thin to provide for my needs," he shared. She beamed proudly from the crowd.

With his time at Clark University drawing to a close, Michael turned reflective: "All the courses I've taken and the class projects I engaged in have enhanced my ability to identify what really interests me and where my core competency lies in my profession."

Post-graduation, Michael plans to seek a career that applies GIS and Remote Sensing to sustainable development and environmental conservation locally or at a global scale. While he's not sure exactly where that will lead him, he has faith that the world-class education he's received at Clark has prepared him well for any challenges that come his way. "I firmly believe Clark University has positioned us to stand among the fearless and poised for unending triumph in this present-day society," he encouraged graduates.

Michael urged his classmates to be unrelenting in their pursuit to make the world a better place. He charged his fellow graduates with three tasks as they prepare to embark on their careers: "Achieve outstanding success, invest in the system that brought you this far, and do everything in your power to protect the environment."

Michael ended his commencement address with a parting phrase from the Yoruba language of his native Nigeria: 'ipade wa bi oyin' or 'see you all on a joyful note.'